Canada Elite 16U tipped off their AAU season at the Under Armour Association circuit in New Orleans and came home 2-2.

More importantly a couple key components on the roster PG Jordan Henry and C Liam Courtney both picked up offers from Virginia Tech. 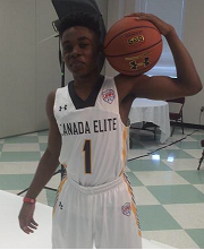 2017 5'7" Jordan Henry (Pine Ridge Pumas) was one of top floor generals in all of Canadian high school basketball throughout 2014-15.

Signature moments this past season with Pine Ridge included 55 points in a LOSSA game and a bronze medal at the 2015 '4A' OFSAA after scoring a game high 21 points in the consolation final versus Henry Carr.

Head coach Shane James has been Henry's biggest advocator from day one. James told Canadian Ballers the little engine that could is arguably the top point guard in Canada no matter the class, 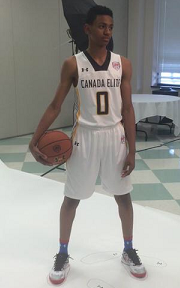 With his length Alexander-Walker wreaks havoc on the oppositions passing lanes that saw him also lead the team in total steals throughout the weekend with 5.

Alexander-Walker plays high school ball with St. Louis Christian in St. Louis, MO. He played major minutes south of the border and down the stretch won some games for coach Casey Autenrieth. Nobody has doubted his skill set but adjusting to physicality south of the border is an area NAW is showing significant strides in especially with on ball defending. Growing like a weed and knocking on 6'6" he has a big time chance to finish growing out at 6'7" plus. As his strength improves his shot will too which is a scary thought. 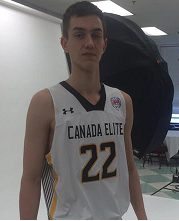 With Henry and Alexander Walker running the show the Canada Elite 2017 roster has an abundance of size. It was big to begin with and it added even more length over the winter headlined by Canadian cadet 2018 6'10" Liam Courtney, a highly skilled big that offers head coach Shane James an athletic defensive presence.

Courtney through 4 games in New Orleans led the team in rebounding with five per game. Offensively he was inconsistent and showed he has some ironing out to do.

Two games were a write off due to lack of touches (2 FGA combined) but when he did get a steady diet of field goal attempts he shot 1-for-6 with 8 boards against DC Premier then bounced back with a solid 14 point, 6 rebound showing versus Mo Williams Academy. Improvement being assertive and aggressive should come with age.

Next stop Louisville Kentucky on April 24-26.