Oakville, ON native spent 2015-16 with OSBA outfit The Hill Academy 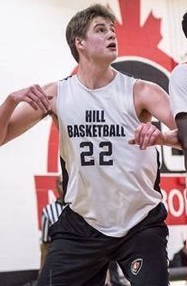 1999 born 7-footer Alex Christie has pledged allegiance to 2A NEPSAC power The MacDuffie School. Set to suit up for the Mustangs starting this fall.
Christie spent two years at Holy Trinity in his hometown of Oakville, ON before spending last season at Hill Academy in Brantford, ON.
After Holy Trinity Christie was slated to attend St. Marcellinus with RJ Barrett before the Spirits prep program blew up. Leading Christie at the eleventh hour to join The Hill Academy  in 2015-16.
Now in 2016-17 he has found a perfect match. Rivera who was tipped about Christie on an AAU trip fell in love at first sight after watching Christie play for UPLAY Canada 16U. After meeting his family it just felt right.

"We do a great job here with kids that fly under the radar. I had the chance to connect with Alex through a friend of mine who is up in Canada and supports our program a big deal and loves what we do with big guys. That's how we got wind of Alex. Talking to Alex and his family, from day one we knew he had a bright future, " Rivera said.

For Christie much like his predecessor Jordy Tshimanga he has a reputation for being wired tight between the ears and above the neck, a strong area his new coach thinks will help him earn everything he is about to get.

"Everyone has to come in and earn what they get but we are really excited for Alex’s future for a variety of reasons. One he fits our school tremendously. People look at players and they have an opinion but they don’t realize how fit into your institution is most important. You get a kid that fits your institution you don’t have to worry about all the off the court stuff. Just jump right in to development and systems,” Rivera told Canadian Ballers.

The MacDuffie School is a private nonsectarian coeducational college prep program. As an up and coming NEPSAC program they have been a main fixture at the Hoop Hall Classic the past two seasons. They've also pumped out a bevy of division one talent. It's Division One list the last two years includes Montreal, QC’s Jordy Tshimanga (Nebraska) and John Calipari’s son Brad (Kentucky).

In 2015 the Mustangs defeated the Orangeville Prep team that featured Jamal Murray and Thon Maker. Rivera feels Christie is built for the rigorous academic curriculum and strong athletics programs he will deal with day to day in the New England area.

“Alex has a 3.5 GPA, he tested in the 95 percentile on his SAT. He comes from a very academically driven family. We are real excited about his future at MacDuffie School. He’s all of seven feet, he can run, catch, takes up a lot of space and we’ve had success with bigger guys. Were just really excited for him.” River added about Christie's future prospects.

There are a good number of independent prep schools that do a good job however nationally and internationally there is no tougher high school league on the planet then NEPSAC.

They may not be granted permission to play in the DICKS National tournament but if you go down their schedule, 30-35 games, pound for pound your playing 3-5 D1 players any given night. Two twenty minute halves, college rules, three officials, good coaching, NEPSAC offers the whole nine. As for Christies expectations this fall, Rivera is confident he can slowly but surely get him up to speed upon arrival.

Rivera inherited the program after his predecessor Jerry McCallough got a job under Orlando Antigua at South Florida. Inheriting Tshimanga, and working for a Canadian dean on campus Rivera feels he has a pulse on the traditional Canadian who makes the jump south of the border to pursue their basketball dreams,

"When I inherited Jordy and having a head of school who is Canadian I get to interact with a bunch of Canadian students on campus and on the AAU circuit and just unbelievable. Unbelievable how committed most are to their grades, respectful and just how appreciative they are from the opportunities they get."

"Jordy thanks us every day, every single day. He may not say thank you every day but he showed us in his drive and will. I see a lot of that with students from Canada. What we love about the Canadians is how they are so appreciative. Alex hasn't arrived and yet his family is so appreciative of the opportunity ahead. I just love that."

There you have it. As Eddie Ekiyor (New Hampton), Juilan Roche (Proctor) and Jordy Thsimanga (MacDuffie) depart the NEPSAC, now in comes 7-footer Alex Christie to MacDuffie. More importantly for the Mustangs and the NEPSAC, the Canadian contingent continues...

1999 born 7-footer Alex Christie has pledged allegiance to 2A NEPSAC power MacDuffie and will suit up for the Mustangs beginning this fall.
Christie spent two years at Holy Trinity in his hometown of Oakville, ON before spending a a last season at Hill Academy in Brantford, ON.
After Holy Trinity and before joining Hill Academy, Christie was slated to attend St. Marcellinus with RJ Barrett before the Spirits prep program blew up. Leading Christie at the eleventh hour to The Hill Academy now called The Rise Center.
Rivera while on an AAU scouting trip identified Christie while playing for UPLAY Canada 16U.