Hanging on to a Peach Jam spot, Bounce have tall task on West coast.

This year’s collection of CIA Bounce talent is majority built from the 1999 born Canadian generation. Headlined by the duo of Simisola Shittu and Ignas Brazdeikis, both Shittu and Brazdeikis have been  better than advertised earning the nickname IGGY AND SIMI SHOW after twelve terrific showings on the elusive NIKE Elite Youth Basketball League (EYBL) circuit. 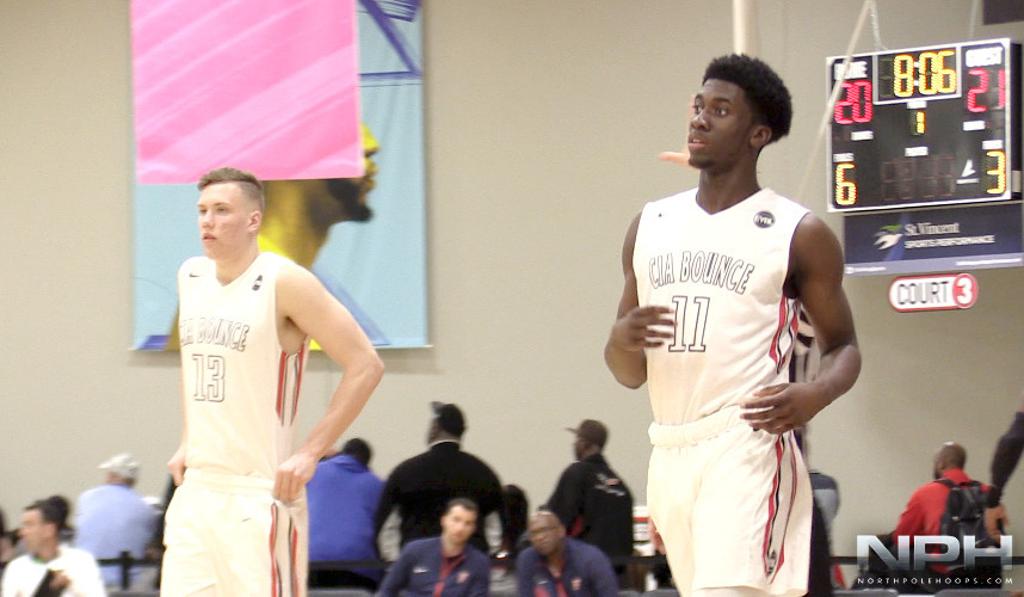 Brazdeikis a Lithuanian-Canadian is one of the most talented scoring prospects in Canada today – and possibly in the history of our country for is age. He has an impressive  portfolio to back it up. As a member of Orangeville Prep, Brazdeikis has a 28 point game versus Oak Hill to his name, and then in March hung 50 points vs Prolific Prep.  During the Bears Ontario Scholastic Basketball Association  (OSBA) season, Brazdeikis picked up the league’s Most Valuable Player award. One of many signature moments domestically includes during the championship game when Brazdeikis poured in 27 points and 10 rebounds. On this year’s EYBL scene Iggy has been equally impressive. Pulling up, on the block, spotting up…it really doesn’t matter to this Lietvous Canadian hooper .

Brazdeikis has shot 33% from 3, 56% from the field and 70% from the charity stripe. Iggy has shot a true shooting percentage (which takes into account 3-point percentage, 2-point percentage and free throw percentage) of 58%. As a result Brazdeikis is averaging 24 points per game, good for 3rd in the entire Nike EYBL player pool.

Iggy is best on the block, where he can use either his height or strength (6-8, 220lbs) to his advantage. He is also deadly in transition where his knock down ability is a constant threat. There is no doubt in Iggy’s offensive prowess but surprisingly he is also justified this spring that he is a formidable rebounder. Brazdeikis is collecting 7.9 rebounds per game, 2.0 on the offensive glass.

Simisola Shittu of Burlington, Ontario  has also been in career form for Bounce during the spring sessions of EYBL. Defensively Shittu has shown the ability to guard one through five. This spring leaves no doubt he is a bonafide NBA prospect. Albeit his improved passing ability and decision making its looking more and more like Shiitu is a talent  that can make 100 million in the NBA as a power forward but verdict is still out if he will make a dollar as a guard.

Shittu is sitting ninth in EYBL scoring with 20.7 points per game and is doing most of his damage inside the paint and on the glass. Shittu is exploiting his quick leaping ability and smart anticipation to play the angles on caroms off the glass to the tune of 10.6 rebounds per game, good enough for sixth in the entire EYBL player pool.

Against  ESPN’s no.5 ranked 2019 Trenton Watford (6-9, 210lbs) Shittu was extraordinary to the tune of 34 points and 11 rebounds while keeping Watford in check with 26 points and 7 rebounds. In the head to head matchup, Shiitu matched Watford’s rebounding totals alone on the offensive glass. Impressive stuff from the Canadian with both Jamaican and British blood lines.

While the Bounce team currently hangs on to their divisions fifth and final Peach Jam spot in group C, they have their work cut out for them entering the West Coast portion of  EYBL. After starting 3-1 in Virginia, Bounce went a mediocre 2-2 in Indianapolis, then a disappointing 1-3 in Georgia. Now sitting with a .500 record entering California, the 2017 CIA Bounce edition is playing with fire. They will play three games against the cream of the crop in EYBL. Then will wrap up the 2017 EYBL regular season with a highly anticipated game versus their Canadian rivals Uplay. Uplay will be with out Canadian phenom Rowan Barrett Jr but will be licking their chops to justify that their talent outside of Barrett merited a spot on the EYBL circuit. Uplay officials would love nothing more then to knock off their rivals despite their hopeless 2-10 record. But before the all-Canadian tilt Bounce has a tall task considering the  combined record of Bounces first three opponents in California is 30-6.

As terrific as the IGGY And SIMI show has been the lack of supporting cast production on the perimeter has been the down fall of 2017 Bounce dwindling win loss record.

Aside from 6-7 swingman Quincy Guerrier who emerged as the third option for Bounce averaging 12 points and 6 rebounds, most of Guerrier’s scoring has taken place inside the paint where he is shooting a lofty 65%. Outside he is only knocking down 28% of his triples. Downtown  (30% as a team) and free throws (59%) will be areas where Bounce must improve as they take their talents to the west coast next weekend.

This summer’s Bounce roster also includes Orangeville Bear Keshaun Saunders, a prospect with an abundance of big game experience that has been arguably under utilized so far.  Bounce will be hard pressed to qualify for Peach Jam if Saunders isn’t utilized more. Saunders who averaged 18 points per game, 5.2 rebounds and 4.9 assists with Orangeville is only averaging 4.8 points per game  on this year’s circuit with a meager four field goal attempts per contest.

Lastly under the microscope in California will be the lone 2000 born starter, point guard Joel Brown. Brown who does all the little things that require zero effort great will need to offer more if Bounce are to qualify for 2017 Peach Jam. The absence of  former Bounce guard Jalen Llewellyn (enrolled at Virginia Episcopal last fall, then joined Team Loaded on the adidas circuit this spring), plus a late scholastic season injury to Junior Farquhar has been evident. Both absences have forced  Brown to be thrown in the fire. As lead guard Brown has only attempted 6 total shots outside the paint only knocking down 2 through 12 games. Opponents are beginning to take notice of Browns lack of threat from the perimeter by sagging off him and putting more defensive emphasis on the Bounce big three Brazdeikis, Shittu and Guerrier. Brown carries 3.4 assists per game along with a 2.1 turnovers per game into California in addition to 2.8 points per game scoring.

Brown's upside  is better than statistics are showing. One area Brown can improve with a sense of urgency is scoring inside where he has yet to record back to back games with 4 or more plus points inside the paint. An area he is reputable for in either finishing among the trees or constantly finding spot up shooters.

With improved play from their starting point guard, more Keshaun Saunders and tiding things up behind the arc  and from the charity stripe,  Bounce should be able to prevail to Peach Jam and match their 9-7 overall record from last summer. Gut check time for the 2017 edition of Canada's powerhouse AAU program.