After catching Moore play against CIBA (ON) the team featuring 2018 NBA draft hopeful Matur Maker, Moore was impressive earning game high 26 points and showing off his tenacious two way game. Moore was either hounding down rebounds or attacking the 6-10 Maker and demonstrating his above the rim game along the way.

Playing an expanded role  for Rise Prep (ON) the 6-4 combo guard is the younger brother of former Temple standout Ramone Moore and brother-in-law of current Toronto Raptors guard Kyle Lowry. 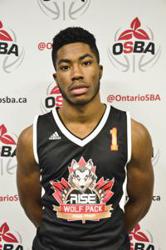 Canadian Ballers: Ontario Scholastic Basketball Association (OSBA) is in their 3rd year of existence, your first  Rise Prep (ON). What was your expectations before arriving in Canada and your thoughts now  at the midway point?

Rahmir Moore: When I found out I was coming to Canada I didn't know what to expect ... I was happy and sad that I was leaving my family but this is another way to get to the pro's ... I told myself I wasn't coming here to play around. I'm coming to get better as a player and person ... midway point .. I feel that I got tremendously better and I feel that I'm doing what I told myself I would.

Canadian Ballers: Coming from Philadelphia what is the identity of a Philly baller and how does it translate in your game? For college coaches reading or supporters of the program you one day pledge to, describe your playing style?

Rahmir Moore: Philly ballers are different because of the mind set we play with. We don't care about who is good or who is on top. Part of a Philly baller is knowing it's heart over everything, the smallest guy would give you 50 points and talk trash to you the whole time. Philly ballers are physical and very tough.. for me it's the same thing. I feel I have to play with a underdog mentality because nobody knows my name and I'm trying to make a name for my self.  Each game I play extremely hard, I'm that dog that everyone needs ...The type to do whatever my team needs me to do to get the win.

Canadian Ballers: How has the experience been  playing for Coach Jeremie Kayeye, what is the identity of Rise Prep’s playing style, and what can the Canadian community and college coaches expect from Rise Prep (ON) during the second half of this season?

Rahmir Moore: Coach is the rock of our team, we've had our highs and lows but this guy is a tremendous coach. His passion for the game is second to none ... he wants to win games more than us .. he makes sure we have everything. For us he goes that extra mile waking up at 6 am just so we can work on our game, ain't too many coaches doing that.  Rise Prep is a fast pace team. We like to run a lot. In some practices players even vomit .. .the reason behind us running a lot is so in games we play that fast pace we want. We are very tough and we don't take no stuff from anyone. It's no one person our identity,  it's all of us,  every single one matters and contributes.

Canadian Balllers: As you build a buzz around your name enroute to graduating in 2019 what are some of the the things you will be looking for in a college and what do you plan to work on from now untill then to help prepare you for the next level?

Rahmir Moore:  Looking forward a division 1 school in the US where it would be easier for my family to come see me play. I want to go to a program that values education and high achieveing athletes and one that will also develop me as a player. As long as I play I will always be working to perfect my craft and I want a coach that he doesn't coast, but puts pressure on me to be better on and off the court. Obviously I want to play ball professionally after my college career, but things happen that you can't control and I want to have a degree and pursue things beyond basketball. In the off-season I'll be working on core strength so I can control my body more when finishing in traffic. I want to work on my off hand and being able to move the ball faster with it. Also working on being more comfortable being a ball handler and facilitating.

Canadian Ballers: Last but not least any collegiate or pro players you model your game after, study their film. If so who and why?

Rahmir Moore: My brother in law is Kyle Lowry so I'm really lucky because I get to pick his brain, watch him play and then hit him back and watch film with him. I'd say I model my game after Kyle, Ramone Moore who is my brother (Went to Temple and he plays overseas now in Australia),2010 Derrick Rose and his body control in transition and attacking the basket. LBJ of course because he has great vision and makes his teammates better. I'm always practicing and working on how I can find my teammates in different areas on the floor, or finding them in their shooting pocket by working on different passing styles, so i get that from LBJ. I like watching Bradley Beal too because of how quick he is and how he finishes at the rim, controls his hips in traffic. We do a lot of film review at school so I'm always with our coaching staff watching film on myself, missed passes or opportunities, our opponents, their key tendencies, etc

This Philly prospect Rahmir Moore has tremendous upside and is a name to monitor moving forward playing prep basketball in Canada. Rise Prep (On) find themselves 8-2 overall, a two way tie for third place in the 12 team OSBA league. After Moore has had to become accustomed to a new climate and new conditions, he's now ascending into one of the premier prep players north of the border.