1-on-1 with NCJAA standout Abdul Mohamed

NCJAA All-American Straight Out of Ottawa, ON

Born in Kenya's largest city Nairobi, JUCO standout Abdul Mohamed moved to Canada as a child. Both Mohamed's parents are Somalian, but he was born in Nairobi because his dad was helping others learn English so they could immigrate to a first world country.

Standing 6-foot-7 tall Mohamed's height stems from his mothers side of the family. She herself is about 5’11, and her brothers and cousins - all over 6’3. Abdul got his growth spurt the summer heading into his junior year. All which happened when he was living in Waterloo, Ontario but then moved to Ottawa, Ontario two months into his junior season. After a cup of coffee in the 519 area code then settling in the nation's capital, Mohamed opted to do his post-grad at Thetford Academy in Quebec.

After some extensive experience working on his craft in the 519, nation's capital, Thetford Mines and most recently at Gillette, Mohamed has some very appealing aspects to his game that could translate nicely to the next level. A 6-7 small forward with a long wingspan and NBA range. His first step and overall game are smooth rather than explosive, although strength should help him to become more explosive.

After playing a pivotal role for Gillette, Wyoming these past two seasons, Mohamed is about to embark on his college journey after making the most of his junior college career.  During his freshman season, Abdul averaged 13 points and 6 rebounds per game in 23 minutes. This year he's brought that and more to the tune of 15.7 points and 6.5 rebounds per game. Shooting 40% from three-point range, and 48% from the field in 26.5 minutes per game.

In Gillette's postseason conference tournament, the Pronghorns were upset by Trinidad State ending their season prematurely. They still finished the campaign 27-4.  and Canadian Ballers spoke to a big part of that. Canadian baller with Somalian blood. Abdul Mohamed.  Abdul chops it up about improvements to his game, his journey and even reveals which D1 program has been the domino in his current recruitment...

CB: How have you evolved as a player both physically and mentally over the last few years?

AM: I was 18 going onto 19 when I left Ottawa to go play for Thetford. Playing with such a great prep I learned things about the game I really didn’t know coming out of high school. Coming out of high school you are usually the go-to guy, but I learned from coach Igor and Ibrahim that if I wanted to have success at the next level I had to adapt because every high major has their go-to guy. So just learning the little things about how the next level works helped me developmentally, and once I had that my confidence played a huge role in my on-court success.

CB: How would you describe your game and role with Gillette. Anything particular you feel you've added to your game from last season?

AM: Just being comfortable as a bigger guard and playing multiple positions is what I feel like I bring to the table this year. My role with Gillette os play mainly as a wing but I can slide down to the 4 if needed.

CB: What do you think Gillette has this year to help them make a deeper run at the national title?

AM: We were a close group last year and that was a key to our success as a freshman, so I feel like just building on that will help us with making a great run in the national tournament.

CB: Is there anyone you model your game after? Or any similarities from your game to any players playing pro or collegiately?

AM: I don’t know if I model my game after anyone, but if I had to pick I think I somewhat play like Will Barton, or Paul George just because they both are lanky guys who can shoot it and offer the luxury of putting it on the floor.

CB: Recruitment wise is there any concrete offers you can share or any coaches from certain programs working the hardest? Any visits lined up at the moment?

AM: Missouri State offered me, but I’m talking to multiple schools. Saving my visits until after the season because my main focus is winning a national championship here. 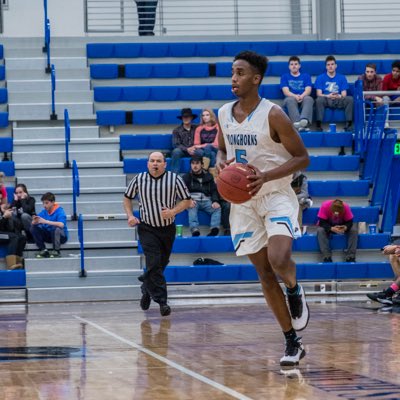 CB: Your school is currently ranked in the NCJAA Top 25. What did you expect and what advice would you give young Canadian Ballers considering to take the same path you did going to junior college?

AM: Playing for a top 25 team in the nation is a very surreal feeling. It just shows that you can do anything you really put your mind to, and I’m blessed with the opportunity I have at hand. The advice I would give to the younger generation is that don’t let a ranking get you too high. I say that because every night you step out on that floor it’s going to be a dogfight, and a ranking can’t help you there.

CB: Being from Ottawa, Ontario and seeing guys like Eddie Ekiyor (Ottawa guy), Narcisse Kalamba (Thetford) playing ball at the USPORTS level is that an option or are you entertaining D1 schools only?

There you have it from Mohamed himself. Lots to like in the six foot seven Canadian. Only time will tell where this wiry thin swingman with tremendous length lands. Stay tuned...